BRINGING THE BOUNCE TO ULURU BRINGING THE BOUNCE TO ULURU

We had the privilege of being welcomed to the Mutijulu community in Uluru recently with Illawarra Hawks player Kevin White. The trip was an amazing opportunity to deliver a Stand Tall program and learn from the community, being inspired by their stories and the incredible landscape in Uluru. It was great to see the program have such a positive outcome with reports that the basketball court is now being used so much that they had to purchase more basketballs to meet the demand for court time. The community members, College and Primary School appreciated the opportunity for the young people in the community to hear some positive messaging around healthy lifestyles, resilience, motivation and the value of education from Kevin White and the Charity Bounce team. The young people are looking forward to the opportunity to have the program back again.

The Stand Tall program was delivered in the Mutijulu Community on the court established ahead of the Rio Olympics by the Boomers national team, driven by NBA champion Patty Mills and the NBPA’s ‘From the Players’ program, supported by the ABA (read the story here).

A big thanks to Dorethea Randall and the amazing Mutijulu community as well as the teachers involved in making the program a success. We are looking forward to working in partnership long into the future together.

Also, a big congratulation to Kevin White who was named as Captain of the Illawarra Hawks for the coming season. During the tour he was a true leader on and off the court and will be brilliant to follow him this season. Make sure you get along and support him by getting tickets to one of the games such as the upcoming Sydney Kings v Illawarra Hawks on Sunday October the 15th. Buy tickets here… Kevin White on the way to meet the Mutijulu community who are the caretakers of Uluru. 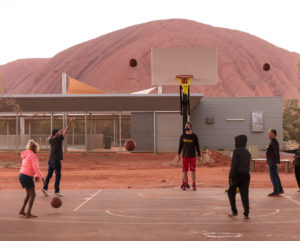 Kevin and the Charity Bounce team getting in a few shots with a few of the local youth. Illawarra Hawks player Kevin White sharing about life on and off court as a professional basketball player. 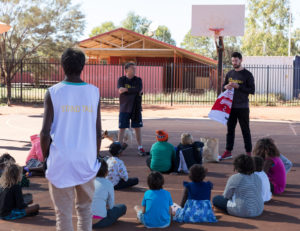 Kevin handing out some Illawarra Hawks gear to wrap up the Stand Tall program. 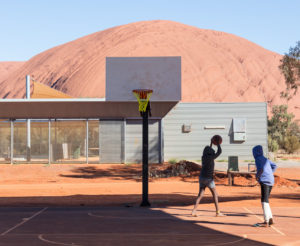 The basketball court has been getting a lot of use since the Stand Tall program took place.