ALL STARS STAND TALL AT THE SYDNEY SCHOOLS SHOOTOUT ALL STARS STAND TALL AT THE SYDNEY SCHOOLS SHOOTOUT

The latest Stand Tall All Stars team was made up of an amazing group of young men who did themselves proud with a fine performance in the recent Sydney Schools Shootout. The team made it through to the semi-finals and were proudly supported by the US Consulate Sydney, with funding provided by the United States Government. A big thank you to the US Consulate for their support of the program and providing the young people with the opportunity to be inspired both on and off the court.

The Stand Tall All Stars program is designed to provide access to ‘out of reach’ opportunities in the basketball world and to support players beyond the on-court competitions to achieve off the court outcomes related to education, employment, health & wellbeing, and professional basketball pathways. The All Stars team was made up of young men aged 14-17 from diverse cultural backgrounds, including Aboriginal, Syrian, Turkish, Sudanese, Samoan, Cook Islander/New Zealand, Indian, Sri Lankan & Australian.

The team was formed less than 2 weeks out from the tournament with Head Coach Mahesh Padmanabhan, who has recently played in the Indian Professional League and been training with the NBL’s Illawarra Hawks players. Also joining Mahesh on the Coaching team was Julian Khazzouh (professional basketballer and former Sydney Kings player), Cal Bruton (Stand Tall Program Director, and basketball legend) and Maher Al Nazzal (experienced Syrian basketball coach).

The culturally diverse team was brought together on the basketball court and formed a strong bond & friendship that was a factor to help them reach the semi-finals. The Stand Tall All Stars finished on top of their pool playing against Shore, Sydney Grammar, Waverley College and Newington College and were defeated in the semi-final by St. Aloysius, 43-33.

We would like to thank Phil Webster, the organiser of the Sydney Schools Shootout for his continued support of Charity Bounce, as well as The Kings School and Cranbrook School players and coaches for hosting the team for the pre-tournament scrimmages, and the US Consulate Sydney for funding the initiative. We appreciate everyone’s contribution in inspiring positive change with the young people we support.

We are looking forward to our next Stand Tall All Stars program at the next tournament coming up in 2018. 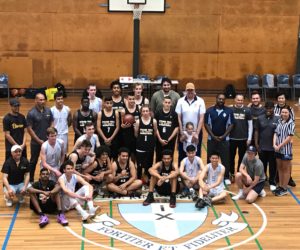 All Stars and The Kings School after the scrimmage. 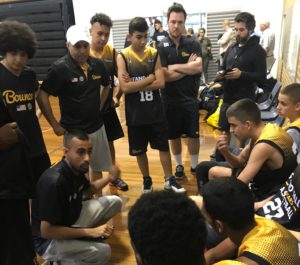 Head Coach Mahesh leading the team during the tournament.

Teams working on their game plan at the scrimmage with The Kings School.